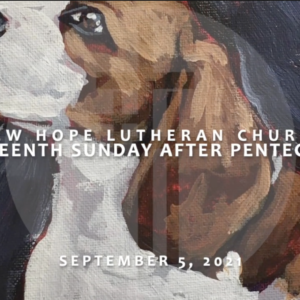 24 From there he set out and went away to the region of Tyre. He entered a house and did not want anyone to know he was there. Yet he could not escape notice, 25 but a woman whose little daughter had an unclean spirit immediately heard about him, and she came and bowed down at his feet.

26 Now the woman was a Gentile, of Syrophoenician origin. She begged him to cast the demon out of her daughter. 27 He said to her, “Let the children be fed first, for it is not fair to take the children’s food and throw it to the dogs.” 28 But she answered him, “Sir, even the dogs under the table eat the children’s crumbs.” 29 Then he said to her, “For saying that, you may go—the demon has left your daughter.” 30 So she went home, found the child lying on the bed, and the demon gone.
31 Then he returned from the region of Tyre, and went by way of Sidon towards the Sea of Galilee, in the region of the Decapolis. 32 They brought to him a deaf man who had an impediment in his speech; and they begged him to lay his hand on him. 33 He took him aside in private, away from the crowd, and put his fingers into his ears, and he spat and touched his tongue. 34 Then looking up to heaven, he sighed and said to him, “Ephphatha,” that is, “Be opened.” 35 And immediately his ears were opened, his tongue was released, and he spoke plainly. 36 Then Jesus ordered them to tell no one; but the more he ordered them, the more zealously they proclaimed it.

37 They were astounded beyond measure, saying, “He has done everything well; he even makes the deaf to hear and the mute to speak.”

There’s so much in or world that seeks

To drive us further apart.

And the desire to put our desires above our neighbors.

Help us be opened to your healing word this morning.

Help us be opened to your transforming love.

A little more than 9 years ago, when we pulled up to the building that would become our home while I was in seminary, a small thought entered the back of my mind.

“What have I done?” said the small and quiet voice.

What mess did I get myself into? What was I thinking? Is this just going to crash and burn like part of me expects it to?

What have I done…?

I tried to reassure myself. “Just…be opened to it.”

Just…be opened to it.

Some of you know, I grew up in Arlington, Texas. Part of the Dallas/Fort Worth Metroplex. A city with the dubious distinction that somehow I feel like they wear as a badge of honor as being the largest city without a public transportation system. Arlington, Texas is suburbia, through and through. Predominantly Anglo, although increasingly diverse, as many of our cities are, but still somewhat segregated, as many of our cities and suburbs are. We tend to congregate and coalesce around folks with similar experiences to us, who look like us and generally think like us.

Hard to get much different than the then-3rd largest city in the United States.

After we had moved in and settled into our apartment, the semester was quickly approaching, and the seminary hosted our Orientation Week. A whole week dedicated to learning more, not just about the seminary, but also about our neighborhood, where my colleagues and I would spend the next 3-4 years. One of the activities we did as part of our orientation was a neighborhood encounter. A time to walk around, ride the bus, ride the train, explore the neighborhood, and really start to begin to know where we had just moved.

The Lutheran School of Theology at Chicago sits at the corner of 55th Street and University Avenue in the Hyde Park neighborhood of Chicago. Right across the street from the University of Chicago. Very much on the South Side of Chicago. And what my colleagues and I found as we walked, bussed, and rode around the neighborhood we had just moved to, was that while we were largely Anglo, the majority of our new neighbors were not. Culturally, we were about to immerse ourselves in an entirely new experience than most of us had ever experienced before.

Chicago. A highly urban place. So already starting to stretch this suburbanite from North Texas.

We came back together after our neighborhood encounter experience. “What did you learn?” one of our professors asked. “What pushed you? What did you notice within yourself?”

“Good observations,” our professor noted. “You’ll be pushed beyond your comfortable boundaries here. Be open to that.”

There are a lot of times that I need reminding of these words from Jesus in our gospel from Mark this morning. Because so much of my default posture is a defensive one, especially when I feel challenged. When we’re met with experiences and stories that challenge our closely-held beliefs and certainties, our knee-jerk reaction is to get defensive. To double-down. To become even more resolute in our position of what we think we know.

And I think that’s also true of Jesus in this excerpt from Mark.

You need to know a few things about the Gospel of Mark. Mark is the earliest written gospel account, written about the year 72C.E., within a generation of the death of Jesus of Nazareth, and within a year or 2 of the destruction of the Second Temple in Jerusalem, amidst incredible persecutions of Jewish people and Jewish Christ-believers. It was written to people in great fear for their lives and their livelihoods. The Gospel of Mark also depicts a very human Jesus. Throughout Mark’s narrative, you’ll hear about Jesus growing in his understanding about who he is as the Messiah and the Son of God, as well as growing in his understanding about the expansiveness of his call, of who exactly he is called to. In the early chapters of Mark, we read about a Jesus that understands his call very narrowly. Written to a very small group of Jewish Christ-followers, likely in Rome, Jesus, early in Mark’s gospel, understands his call and his mission as being sent to the Jewish faithful, the people of Israel. But as Mark’s gospel unfolds, we begin to see Jesus’ understanding grow and change as he has these encounters with people outside of the people of Israel.

Case in point, our reading this morning. This woman, who the author of Mark says is “a Gentile—a Greek—of Syrophoenician origin.” And in Greek, the word for Gentile encapsulates basically everyone who’s not Jewish. But Jesus’ encounter with this deaf man, was also likely a boundary-pushing encounter. Because it occurs as Jesus is on his way back from Tyre toward the Sea of Galilee, in this in-between place where there are not a lot of Jewish folks. So both of these interactions are with folks outside of the Jewish faith, culturally and ethnically and racially different from Jesus.

So if you’re hearing the gospel this morning and Jesus’ words toward this Syrophoenician woman make you uncomfortable, I think that feeling of uncomfortability is spot on. “Did Jesus just call this woman a…?” Yes. Jesus did just call this ethnically and religiously different woman a dog. And not in a nice way.

Remember how I said that the Gospel of Mark portrays Jesus in perhaps the most human of ways, that we probably see Jesus’ humanity most clearly? This passage is one of the ones that illustrates this. We know from very early on in Jesus’ ministry, immediately after his baptism, that Jesus is tempted. Tempted in very human ways, as we are. Tempted by hunger, tempted by security, and tempted by the allure of power. One Latin American theologian says that here we see Jesus being tempted by another very human sin…perhaps the sin of racism…the sin of failing to see the image of God in someone else because they’re of a different ethnic or cultural or racial or religious background…the failure to see the image of God in someone else because of who they are.

So often when we’re met with experiences and stories that challenge our closely-held beliefs and certainties, our knee-jerk reaction is to get defensive. To double-down. To become even more resolute in our position of what we think we know.

You know that feeling of disappointment you get when someone you really look up to falls short of your expectations and fails to meet the sometimes lofty standards that you’ve placed on them?

This Syrophoenician woman challenges Jesus back after he calls her a dog. “Even the dogs eat the scraps that the children drop from the table.”

Be open to learning something different from an unexpected place, Jesus. Be open to being pushed beyond your boundaries of comfortability and what you thought you knew with such certainty.

What gifts do we miss out on because we fail to truly welcome and show hospitality to the stranger who’s right in our midst?

The author of James calls out this favoritism. “If a rich person and a poor person both come into your assembly, and if you take notice of the rich person and offer them a seat of honor while degrading the poor person, you have made distinctions among yourselves and judged with evil thoughts.” If an elder couple and a young family both come into your assembly, and you take notice of the young family and offer them a seat in the pew next to you while dismissing the elder couple, you make distinctions among yourselves and failed to see the image of God in someone else.

We show ungodly favoritism when we welcome rich folks or young folks or folks who we think can help our budgets or build up our programs or volunteer to keep our ministries going and turn a blind eye and deaf ear to those we think can’t do something for us. The kingdom of God isn’t utilitarian. The kingdom of God is one where everyone—long-timers and newcomers alike—are welcomed and appreciated and have hospitality lavished upon them. In other words, don’t welcome someone because they can do something for you, welcome them because they’re a beloved child of God.

It’s one of the things we’re trying to do here at New Hope as we move into this next phase of our ministry together. We’re so thrilled to welcome Jessica to our Staff as our new Director of Worship and Music. So grateful to have Pastor Janelle here to help shepherd all of us and particularly our young people in helping us to ask deep, consequential questions about our faith. So thankful to have Aimee keeping all of our resources for ministry in line. And immeasurably blessed by Danny whose job description has undergone countless rewrites, but whose commitment is steadfast to helping this ministry thrive.

This question of welcome and hospitality is going to be the primary question for us in the coming months. We’re going to be asking discerning questions about our ministry: who’s here, who’s not here, who’s missing from this conversation, for whom do we exist, and how can we better reflect who we believe God is calling us to be in this time.

But all of it…has to do with you.

What gifts do you bring to this table?

What passions fuel your commitment to our shared ministry together?

What areas can you commit to help our ministry thrive?

It takes all of us…all of you.

All of your gifts and perspectives and passions and commitments.

Be open to what’s to come.

Be open to something new.

Be open to change.

Be open to transformation.