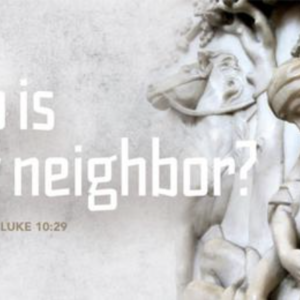 25 Just then a lawyer stood up to test Jesus. “Rabbi,” he said, “what must I do to possess an abundant life?” 26 Jesus said to the lawyer, “What is written in Torah? What do you read there?”

29 But wanting to justify himself, the lawyer asked Jesus, “And who is my neighbor?” 30 Jesus replied, “A certain man was going down from Jerusalem to Jericho, and fell into the hands of robbers, who stripped him, beat him, and went away, leaving him half dead. 31 Now by chance a priest was going down that road; and when the priest saw the man, he passed by on the other side. 32 So likewise a Levite, when he came to the place and saw the man, passed by on the other side. 33 But a Samaritan while traveling came near the man; and when the Samaritan saw him, he was moved with compassion. 34 The Samaritan went to the man and bandaged his wounds, having poured oil and wine on them. Then the Samaritan put the man on his own animal, brought him to an inn, and took care of him. 35 The next day he took out two denarii, gave them to the innkeeper, and said, ‘Take care of this man; and when I come back, I will repay you whatever more you spend.’ 36 Which of these three, do you think, was a neighbor to the man who fell into the hands of the robbers?” 37 The lawyer said, “The one who showed him mercy.” Jesus said to the lawyer, “Go and do likewise.”

God who is our salvation,

We call out to you in our distress and you find us.

You seek us out and pull us out of our despair and hurt.

Make us bold and courageous to extend those same hands

Of compassion and care to those who are in need.

Help us to be neighbors, and make us mindful

Of the help and saving being offered to us from others.

It’s been way too hot recently to do much of this, but up until a few weeks ago, one of our favorite things to do in the afternoon was to go to the park. We still like to go to the park, we just have to get it out of the way early in the day. And recently, Oliver’s been wondering aloud a new question, “Dad, these are our neighbors? This is our neighborhood?”

Last month when we were at my parents house for a few days, we were walking to the park by their house, and then came not a question but an exclamation, “Wow! Grammie and Gramps have lots of neighbors!”

“Yep. Grammie and Gramps have lots of neighbors.”

Do you have lots of neighbors? Or just a few neighbors?

I’ve recently started trying to get to know our neighbors better. Now, I’m an extrovert, so in some ways, the conversations come pretty naturally for me. But with all the craziness in our world right now, I’m kind of doubling-down on this idea that one of the ways to overcome the division and hatred and violence in our world is to just get to know our neighbors more. And I figured I should just, like, practice what I preach.

Having good relationships with your neighbors can go a long way, too, especially in times of distress or need. Maybe you’ll recall a few years ago during Hurricane Harvey, I bet you were checking in on your neighbors, making sure they had what they needed. Maybe they did the same for you. Or during the February freeze last year.

Having and being a good neighbor is invaluable.

So do you have lots of neighbors, church? Or just a few?

A different question—who’s not your neighbor?

A lawyer gets up to test Jesus—more like a scholar in Jewish law, in Torah, less of a lawyer in the legal sense that we think about—this person knows their Scripture, and the lawyer isn’t really asking for clarification, this is an adversarial encounter. The Torah scholar wants to know who Jesus is, where Jesus stands…”Which school do you belong to? How do you, Jesus, interpret Torah?”

“Rabbi, what must I do to obtain a full life?” So notice, this is not a question about a life that never ends, the idea of a never ending life is not a Jewish idea…it’s not really a Christian idea either, at least in the biblical sense, but that’s for another time…this is about a quality of life, a fullness of life now, in the present. “How can I enjoy a richness and a fullness of life now?”

“Love the Lord your God with all your heart, all your soul, all your strength, and all your mind. And love your neighbor as yourself.” The first part from Deuteronomy, the second part from Leviticus.

“Yes, but who is my neighbor?” comes the reply. I told you…this is adversarial.

So Jesus answers these antagonistic questions with a story. Classic Jesus…

Jesus tells a story about a person, likely Hebrew, traveling from Jerusalem to Jericho, who is attacked and left for dead. And all the people who you would think would stop and help pass on by. The nice, upstanding religious folks keep to themselves and pretend not to notice their neighbor in need. But the Samaritan is the one who stops to render aid. And not only does the Samaritan stop and literally and figuratively stop the bleeding, but the Samaritan takes care of this person’s immediate needs, loads them up on the Samaritan’s own transportation, takes them to the next town and shells out 2 denarii, enough to prepay this person’s lodging for 2 months, and also prepays their medical bills. This is absurdly extravagant generosity.

Who’s not your neighbor, church?

Like so many of Jesus’ teachings, this one, too, is scandalous. It’s the Hebrew, the Jewish person, who is attacked and robbed and left for dead. It’s the good upstanding religious folks who pass by their sibling in need. It’s the enemy of one who was attacked that stops to give aid. And similar to so many of Jesus’ teachings, the Samaritans are the oppressed group in this power dynamic. Jesus is always lifting up the sacred worth of oppressed peoples. Samaritans were impoverished compared the wealthy city folks in Jerusalem. Samaritans had been oppressed for many years, by the Hebrews and by Rome. The hero in Jesus’ story is the unlikely one, the oppressed one, the one from the margins.

So often, church, we’ve heard this story of the compassionate Samaritan and imagined ourselves as the one who stops to help. Monica Perin forwarded an article to me last week from a couple of years ago that said that the Christian church in the United States suffers from a bad case of “Disney princess theology.” We have a bad habit of placing ourselves in the place of the oppressed groups. We love to imagine that we’re the ones swooping in to help. We’re the saviors. We’re always the heroes and sheroes and they-roes in the stories. “Well, that’s what good Christians do, they stop to help out.” Yes, truly, but in Jesus’ story that’s not how it went. Church, in the power dynamic, we western Christians who live in the United States are the powerful ones. We’re the ones with the wealth and power worth being robbed of. We’re the ones in the ditch, figuratively and literally. We’re the ones in need of saving. Like, most of all, from ourselves. At best, we’re the upstanding religious folks passing by on the other side.

Can you see, church…within someone you despise…the capacity to save your life?

Can you see your enemy as having the capability and capacity of saving you?

Would you let your enemy save you?

Interestingly, in Hebrew the words for “neighbor” and “enemy” aren’t that different. Leviticus 19:18 is where we first see written that ubiquitous teaching, “You shall love your neighbor as yourself.” Every major world religion has a version of this teaching in their sacred texts, by the way. Amy Jill-Levine, professor at Vanderbilt Divinity, notes that the Hebrew word translated as “neighbor” in Leviticus 19:18 is re’a (“one who dwells nearby”). And it uses the same consonants as the Hebrew word for “enemy”—ish’ra. And in the original texts, as some of you know, the vowels are not present. So is the command to love your neighbor as yourself? Or is it to love your enemy as yourself?

Who’s not your neighbor, church?

In other words, as Amy Jill-Levine says, “When Jesus asks the lawyer, ‘What do you read there (in Torah)?’ Jesus is asking, ‘Are you able to see, in Torah’s words, the command to love both neighbor and those you would see as enemies?”

Can you imagine your enemy, someone you despise, as possessing the capability and the capacity of saving you? Maybe not your enemy, but what about that person that you really just can’t stand? What about the person who just does something to you that you can’t explain, but they make you feel like a not great version of yourself? Can you imagine them as being the one to save you?

It’s a difficult teaching, and a convicting one. Certainly for me.

I don’t know if I want to be able to see my enemy or the person who annoys me or someone who I really dislike as the source of my saving. A lot of times I prefer having someone or something I dislike or despise, because at least then, I have someone else outside myself to blame when things don’t go the way i want. We love a good bad guy. Because then we have someone we can project all kinds of wrongs upon.

But do you have the capacity to love that person? Can you imagine that person saving you?

Psalm 116 this morning reminds us that our saving comes from outside ourselves.

We do not save ourselves. Contrary to everything you’ve ever been taught.

We are a people in need of saving. And dear church, you do not…and you can not…save yourself.

It is God who saves.

And so very often our saving comes from God through the gracious, loving, compassion, and kindness of our neighbors. Those you know well. And those you don’t know well yet. Those you might even consider to be enemies.

You never know when someone might be saving you.

Even someone you least expect.

And keep your eyes open for opportunities to offer that same kindness and compassion to someone else.

We could all use some more neighbors.