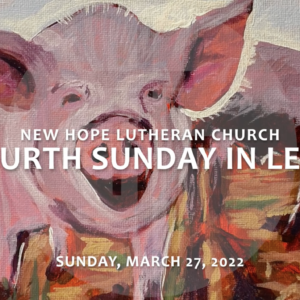 1 Now all the tax collectors and sinners were coming near to listen to Jesus. 2 And the Pharisees and the scribes were grumbling and saying, “This fellow welcomes sinners and eats with them.”

3 So Jesus told them this parable: 11b “There was a man who had two sons. 12 The younger of them said to his father, ‘Father, give me the share of the property that will belong to me.’ So the father divided his property between his sons. 13 A few days later the younger son gathered all he had and traveled to a distant country, and there he squandered his property in dissolute living.

25 “Now the older son was off in the field; and when he came and approached the house, he heard music and dancing. 26 He called one of the servants and asked what was going on. 27 The servant replied, ‘Your brother has come, and your father has killed the fatted calf, because he has got him back safe and sound.’ 28 Then the older brother became angry and refused to go in. His father came out and began to plead with him. 29 But the older son answered his father, ‘Listen! For all these years I have been working like a servant for you, and I have never disobeyed your command; yet you have never given me even a young goat so that I might celebrate with my friends. 30 But when this son of yours came back, who has devoured your property with prostitutes, you killed the fatted calf for him!’ 31 Then the father said to his older son, ‘Son, you are always with me, and all that is mine is yours. 32 But we had to celebrate and rejoice, because this brother of yours was dead and has come to life; he was lost and has been found.’”

You are lavish and extravagant with your gifts.

Especially your gifts of love.

Love us back to life, this morning.

Love us back to ourselves.

Love us back to you.

Who doesn’t love a good party…?

Well, the older son, apparently… A long while ago, when Tiffany and I were planning our wedding (Gosh, we’re getting old, y’all…) there wasn’t a lot of back and forth spent on the kind of celebration we wanted to have and where we wanted to have it. We got married out of college and had attended a fair number of weddings at that point and they were all great times, but we both had this idea of the kind of party we wanted to have and the people that we wanted to be there. For us, it was much more about having our family and friends there and everyone just really enjoying themselves. So we ended up having our reception at the Ballpark in Arlington, and we had hamburgers and hot dogs and cracker jack and lots of cake and an open bar. And it was one of the best parties I’d ever been to.

I mean, who doesn’t love a good party?

This parable, known as the prodigal…well, you probably learned it, like me, as the prodigal son, right? Well folks smarter than me have started calling it just “The Prodigal” or even “The Prodigal Father” which I find interesting. So I went to my trusty google machine…see, I guess I always thought that prodigal meant like, “the returning son” or “the son who came back” and as it turns out, that’s not what prodigal means at all. To be prodigal is to be lavish, very loose with money, “wastefully extravagant” is what Oxford says. Wastefully extravagant. Well, in that way, I suppose the younger son is prodigal; he squanders the inheritance, he blows through all his money. But I wonder, is the younger son the only wastefully extravagant person in this story? No, I would argue. Because when the younger son comes to himself and returns home, his father throws off his robe, throws of his shoes, goes bounding down the road, scoops up his son into his arms, dresses him, feeds him, clothes him, lavishes gifts on him, and says, “We’re going to have a giant party! Kill the calf. Invite everyone. This. Is. A. Celebration!” A wastefully extravagant party.

Who doesn’t love a good party?

When I was planning out our worship theme for this Lenten season and reading through the lessons and everything, this parable was one of the ones that really spoke to me and one of the reasons I landed on Unburden as our Lenten theme. See, the whole idea is that we’ve all really been through a lot over the past couple of years and, truthfully, a lot of us are carrying around a bunch of stuff that’s built up, and we really need a place where we can come and set some of that stuff down. As I’ve said, the invitation to Unburden is an invitation to live into an expansive idea of Lent—rather than the idea of taking away and depriving, what if Lent was a season that invited you to fill up, to be refreshed and renewed? Unburden yourself.

I was also thinking about the fever pitch we’ve all been living with the past few years or so, this feeling that we’ve been drifting further and further apart from one another, even apart from folks we might have been very close to before. And when we start to see each other not as siblings and co-workers in God’s vineyard, but rather as viewpoints and opinions to be won over, we start to view one another as combatants, and so we sort of hurl aspersions at each other, lobbing insults or snide remarks, these kind of stones and rocks and boulders that, I think, we really do intend to harm one another. And so the invitation this season is to unburden yourself, not just of those stones and aspersions, but of the weight that builds up on you when you carry around these feelings of ill-will and opposition and distrust and distaste for your neighbor.

Because that weight eats at you. It weighs you down further and further until you’re stooping lower and lower until you can hardly stand under the heaviness of it. But it does eat away at you. Sort of, gnawing at you from the inside. I would even say slowly choking the life out of you.

I wonder who you think needs the unburdening in Jesus’ parable this morning? Where do you see life being choked out? Whose shoulders are stooping lower and lower under all that weight?

Is it the younger son being crushed by the weight of having to return home to his family having blown through his entire inheritance? Is it the father carrying around the weight of letting his young son go off in the first place? Is the older son’s grudges and resentfulness of his younger brother, and maybe even his father? Is it the scribes and Pharisees that Jesus is talking to in the first place? Is it you, dear reader and hearer?

That’s one of my favorite things about parables…many, many entrances and many, many exits…infinite ways of interpretation…

I think very often we view ourselves as the younger son…trotting off to some exotic place with all God has given us, only to end up squandering these gifts and feeling guilty and so we feel like we have to return to God with nothing to show and kind of beg God to be forgiving and to take us back… I think that’s kind of a classic interpretation.

I wonder if this morning you might see the ways in which you’re very often much like the older son…responsible, doing what you’re supposed to, but you turn indignant and self-righteous when those that you feel like squander the gifts they’re given come sulking back and receive such lavish gifts of compassion and forgiveness even though you were the responsible one, not them… Scandalous grace… That’s the kind of stuff I’m talking about that eats at you from the inside…that’s the kind of stuff that slowly deprives you of life…

Could you receive the father’s gifts to the younger son as invitations to you, as well. See what love the father has for his sons… See what love God has for God’s children… I do think the father figure in this parable tells us something important about the nature of God. The father didn’t even let the younger son finish his rehearsed apology. The son couldn’t even ask to be treated like a hired hand. “Clean him! Dress him! Feed him!” the father says. The father doesn’t wait for the son to trudge all the way up the long winding road to the house…the father sees his son from far off and throws off all decorum and propriety, robe flapping in the wind, shoes flying off his feet, “My child! My child!”

See what love God has for God’s children…

The wasteful extravagance of the father. “Kill the best calf. Throw the biggest party. Invite everyone.”

“This child of mine was dead…and is alive again…”

God loves us back to life. Even, and especially when we’re so good at holding onto those things that slowly deprive us life from the inside.

God is wastefully extravagant with you, dear child… Always seeking you out. Always calling you home. Guiding you to return. Loving you. Forgiving you. God’s nature is one of extravagance and abundance.

Like the father in the parable, God is always longing for a reunion, running toward you, gathering you up, calling you by name, rejoicing in your return, celebrating your change of heart, forgiving you.

Loving you back to life. Even and especially when you find it so difficult to love yourself, dear one.

And if this is the nature of God, how then are we to be, those of us who bear the name of Christ?

Set aside your grudges and indignation. They do not serve you.