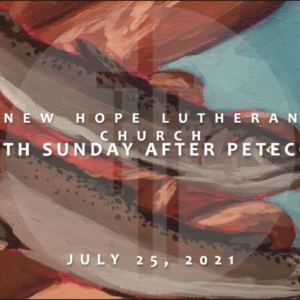 1 Jesus went to the other side of the Sea of Galilee, also called the Sea of Tiberias. 2 A large crowd kept following him, because they saw the signs that he was doing for the sick. 3 Jesus went up the mountain and sat down there with his disciples. 4 Now the Passover, the festival of the Jewish people, was near. 5 When he looked up and saw a large crowd coming toward him, Jesus said to Philip, “Where are we to buy bread for these people to eat?” 6 Jesus said this to test Philip, for he himself knew what he was going to do. 7 Philip answered him, “Six months’ wages would not buy enough bread for each of them to get a little.” 8 One of his disciples, Andrew, Simon Peter’s brother, said to him, 9 “There is a boy here who has five barley loaves and two fish. But what are they among so many people?” 10 Jesus said, “Make the people sit down.” Now there was a great deal of grass in the place; so they sat down, about five thousand in all. 11 Then Jesus took the loaves, and when he had given thanks, he distributed them to those who were seated; so also the fish, as much as they wanted. 12 When they were satisfied, he told his disciples, “Gather up the fragments left over, so that nothing may be lost.” 13 So they gathered them up, and from the fragments of the five barley loaves, left by those who had eaten, they filled twelve baskets. 14 When the people saw the sign that he had done, they began to say, “This is indeed the prophet who is to come into the world.”
15 When Jesus realized that they were about to come and take him by force to make him king, he withdrew again to the mountain by himself.
16 When evening came, his disciples went down to the sea, 17 got into a boat, and started across the sea to Capernaum. It was now dark, and Jesus had not yet come to them. 18 The sea became rough because a strong wind was blowing. 19 When they had rowed about three or four miles, they saw Jesus walking on the sea and coming near the boat, and they were terrified. 20 But Jesus said to them, “It is I; do not be afraid.” 21 Then they wanted to take him into the boat, and immediately the boat reached the land toward which they were going.

Bless our not enough-ness this morning.

Bless it and multiply our gifts and abilities.

Use us to feed your world.

I’m not sure what it is about the summer that things just feel lighter to me. At least in the life of the church, we take this big long stretch after Pentecost, and the changes to worship week-to-week don’t feel quite so rapid-fire. Maybe being caught up in the program calendar that’s tied so closely to the academic calendars of the area school districts has something to do with it, too.

Busy-ness-wise, summer’s just an easier time to find time to get away for a vacation.

Whatever the reason, this summer has been a welcome load off of my shoulders. Especially after the past 18 months we’ve all had, I think most of us have needed to get out and stretch our legs a little bit. A lot of folks have taken vacations that were put on hold or took extended time away to be with family. Times and spaces that are regenerating and nourishing for the soul. All great things. Really living into that rest, respite, and sabbath I was talking about last week.

As a reminder, we’re in the midst of a worship series for the second half of the summer called Bread of Life, where the gospel readings are all centered on bread and feeding and nourishing and Jesus referring to himself as the bread of life. And within this series we’re wrestling with the questions of what feeds us and nourishes us and sustains us, especially in those times when we find that we ourselves are the hungry ones. How can we be filled up, so that we’re full and sustained and energized to be sent out to fill others?

Last week, we talked about rest that nourishes and fills us up.

This week, how can generosity sustain and nourish us?

Another reason I enjoy the summer is because of all the memories that pop up for me on Facebook. Do y’all look at these? I think it’s cool to see what I was doing last year, 2, 3, 5, 9 years ago. The summer’s always fun for me, especially within the last 5 years, because 4 years ago, we welcomed some of our friends from our sister congregation El Buen Pastor in El Salvador, and 2 years ago, I was part of the small group that went down to visit them in San Salvador and Usulután.

Really great memories, but one of the things that have stuck with me since 2019 and being in El Salvador—and I’ve found this to be true, not just in El Salvador, but other places around the world, and even here in the U.S.—it’s so striking to me that it’s so often the folks with the least, materially speaking, that are the most generous. Maybe that’s just the perception, because when you have very little, materially, what you do give to others is often seen as extravagant and overabundant.

But one night in particular in 2019, we went to Pastor Julio’s house. And Pastor Julio lives very near to a bunch of his family and everyone had been invited over for dinner. But the next day was also Sunday and there was going to be a special lunch for a few First Communions they had. So on Saturday when we went to Pastor Julio’s house, they were making pupusas for dinner that night and the lunch the next day, and church, I can’t tell you, I’ve never seen just gigantic tubs of masa. Like, there were literally hundreds of pupusas being made. It was incredible.

And one of the things I kept coming back to in my mind was that here was a family, who already give so much of themselves for the 4 communities of El Buen Pastor, here were families who likely pooled resources to get everything they needed so that people in their community were fed.

They made food. Good food. A lot of it.

They took what they had and used their resources so that people in their community were fed.

Because here’s the truth, church…you’re all hungry.

Whether you’re 1 of 9 people in the U.S. experiencing food insecurity, or your emotional needs are being starved, or your stomach is groaning for spiritual fulfillment…what’s true, church, is that we are people who are starving, who are begging someone to share just a crumb with us.

And when Jesus gets involved, watch out, because that “just a crumb” can be a belly-bursting feast of abundance where all are fed and each has their needs met. Especially when each of us brings what we have to the table, offering it to share, and giving it to God to bless and use for God’s purposes and do with it what God does…using what we have and what we offer to feed folks who are starving…including you, dear people.

One of my favorite lines about this comes from Lutheran pastor and theologian Pastor Nadia Bolz-Weber. She was doing a book tour with the release of her first book and I got to go hear her speak in Chicago. She read some excerpts and when she was talking about her own sense of call and identity, just before she decided to pursue this pastor thing, she said that it was as if God had asked her, “So, Nadia, whaddaya got?” She says, “I took my hands out of my pockets and looked at them. ‘Nothing,’ I mumbled, ‘I’ve got some change, a paperclip, and pocket lint. I’ve got nothing.’” “Nothing?! That’s perfect!” God replies, “Now THAT I can work with.”

Nothing is God’s favorite material to work with, she says.

Nothing…not much…those feelings of emptiness and inadequacy…dear friends, your not much…your nothing…that’s God’s favorite material to work with.

That’s the miracle of five loaves and two fish. Not only are people fed and their needs met, but there are leftovers! 12 whole baskets full!

This pandemic has clarified and brought to the forefront a lot of needs in our communities. And churches were no exception. There were times last year, especially toward the beginning of the pandemic, that we were worried about what would happen if things just suddenly dried up. But in those first months right after the start of the pandemic, something amazing happened. People started giving more of their offering, fulfilling their commitments earlier in the year, hoping to help keep us afloat. And it absolutely did. And things evened out, but even still we ended 2020 on budget.

And as this pandemic drags on and on and on, it gets harder and harder to keep going back to that well. Anxieties ratchet up and we all start to wonder if we’ll have “enough.” We’ve had some pretty lean months in 2021, but June was a really great month for offerings. July’s not looking stellar, but I trust that things will even out. I trust that with God, there will always be enough.

Last story…we’ve been holding off launching our Capital Campaign to the entire congregation since the beginning of the pandemic. But since we started actively receiving gifts toward our campaign, we’ve had folks who have been giving regularly to it. Tiffany and I sat down last year, we’re budget people, and we were working out what we thought we could regularly contribute. “What if we just took what we regularly give to our offering and give that same amount to the Capital Campaign?” I said. “What if we just doubled it?”

But here’s the thing…there’s always been enough. It was a risk, sure. But we’ve always had enough.

Church, incredible things happen when you share what you have, offer what you can to God, and ask God to bless it and use it for God’s purposes…to do with it what God does…feed folks who are starving.

Generosity is a nourishing and filling thing.

There always seems to be enough.

Even when what we start with is just a crumb.