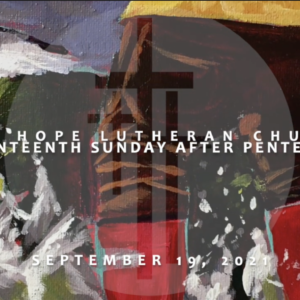 30 [Jesus and the disciples went on] and passed through Galilee. Jesus did not want anyone to know it; 31 for he was teaching his disciples, saying to them, “The Son of humanity is to be betrayed into human hands, and they will kill him, and three days after being killed, he will rise again.” 32 But the disciples did not understand what he was saying and were afraid to ask him.
33 Then they came to Capernaum; and when Jesus was in the house he asked them, “What were you arguing about on the way?” 34 But the disciples were silent, for on the way they had argued with one another who was the greatest. 35 Jesus sat down, called the twelve, and said to them, “Whoever wants to be first must be last of all and servant of all.” 36 Then Jesus took a little child and put it among them; and taking the young one in his arms, said to them, 37 “Whoever welcomes one such child in my name welcomes me, and whoever welcomes me welcomes not me but the one who sent me.”

Sometimes we can get so caught up

In our own ideas about greatness

That we fail to see the places and the people

You have called beloved and great.

Give us eyes to see, this morning.

Give us hands and arms and feet and hearts

For serving, and embracing, and loving.

In the Summer of 1996, the Olympic Games were held in Atlanta, Georgia. And prior to any Olympiad, there’s always a torch relay. The Olympic flame makes its way from Olympia in Greece to the host city where the Olympics will be held. In the summer of 1996, that relay made its way right through downtown Arlington, Texas where I grew up, and the school were my sister and I were attending summer daycare that year was just down the road from the route and our school took a field trip to see part of this incredible journey representing peace and the human spirit.

The streets were packed and we were able to get a front row spot and the image of that torch and everything it represented was so amazing and so wonderful to watch.

That’s one of the earliest memories I have of watching any kind of parade.

Later through our years growing up, my family would go to our town’s 4th of July parade. Also a great time. Great to see the firefighters and police, the high school bands, Elvises riding tiny motorcycles.

In high school, I would end up marching in that 4th of July parade as a member of my high school band. The parade became less of a spectacle and more of a chore. (Teenagers never want to get up early, least of all in the summer, to spend the morning marching a couple of miles in the Texas heat…that’s just true.)

The wonder and amazement of parades ended up being replaced by a sense of annoyance and an attitude of “I’d much rather be doing literally anything else.” And even after having not marched in a parade in years, I don’t think I’ve ever fully recaptured that spirit of awe.

But then 2 years ago, something incredible happened, and our family grew. And all of a sudden, there was someone who didn’t have all these experiences. There wasn’t all this baggage associated with these new things. They were just new. And small things like leaves falling or wind blowing or the snow from the past February, and oh, have y’all seen fireworks??!? Like explosions of rainbows in the sky. Everything is new!

And I’ve gotten a small glimpse into what it’s like to discover that wonder and amazement again.

I’ve been reflecting this week and wondering at what point are the spectacle and wonder in our lives replaced with cynicism and a sense of annoyance and obligation? Like, at what point do we lose, or forget, the ability to see the magic?

In our gospel today from Mark, Jesus and the disciples are walking along and Jesus is trying to tell them something important, teaching them that the Son of humanity is going to be betrayed, and be killed, and three days later will rise again. Like, this is what’s going to happen y’all. We know it by now, and this is the second time in the gospel of Mark that Jesus is trying to tell the disciples. And time and time again, I feel like we wonder why the disciples never seem to get it. But are we really all that surprised? Because as it turns out, when they get to Capernaum, and Jesus asks them what they were talking about as they walked along, it turns out that instead of listening, they were arguing with each other about who’s the greatest. But is it all that unbelievable that these barely-20-year olds, probably more like teenagers were arguing amongst themselves, not really paying attention to what Jesus is talking about, but having their own conversation instead?

And Jesus says, “Let me tell you about being great.”

And then to drive the point home, Jesus picks up a random child and sets it in the middle of them and says, “Here is greatness. This is what it means to be great.” To welcome, to show hospitality to, to receive—the Greek is super-interesting here…dechetai…it’s like, to welcome as part of your own family. To welcome those who cannot welcome you. To show hospitality and kindness to those who can’t repay you. To treat a child—someone who was on the lowest levels of the ladder of society—to treat this young one who was considered lower than you, beneath you…as a member of your own family.

Are you watching what’s happening right now down at our Southern border? 14,000 immigrants, mostly Haitian, in Cuidad Acuña, right across the Río Grande from Del Rio.

Where is greatness found, church?

What does it mean to be great?

I feel like we have lots of ideas about what it means to be great, personally, and lots of thoughts about the times when we as a people, or even as a church, were great. But do we really remember those times accurately? When you examine what we largely believe makes us great, does that match up with what Jesus is talking about here?

We tend to measure greatness by accumulation—accumulation of stuff, of titles, of degrees, of dollars. But just before this Jesus talks about giving up your life, and here, says those who want to be first must be last, and then takes a young child and sets the child in the disciples’ midst. It seems that Jesus’ ideas of greatness don’t reflect our own.

Greatness is found in the least. In giving up.

The whole idea of the kingdom of God is found in this great inversion—this idea that it’s those on the underside, the outcast, the weak, the oppressed…it’s the ones who, by all earthly measures, are the least—Jesus says the kingdom of God belongs to such as these.

You want to know what greatness is? Look to a young child.

I think for Christians, and certainly, for Lutherans, we’ve turned the life of faith into a lifetime exercise of knowing. “If I just learn more, figure it out, if I just knew more stuff…then I would know God.” I think we Lutherans do ourselves, and God, a great disservice when we think we can fully understand God. Lutheran theologian Karl Barth has a way of saying, in effect, if you think you’ve got God figured out, it’s safe to say you’re no longer talking about God. Essentially, God is beyond our ability to fully comprehend, to fully understand.

Rather, Barth asserts, we experience God. We can say, we can testify to, certain things that are true about God because we’ve experienced God in a certain way.

I think that’s what Jesus is getting at here…at least, in this season, that’s what I think. Both Jesus and St. Paul use the language of a childlike faith a lot. The young person gets lifted up often as the model of a faithful life. And so often that’s been taken to mean a faith that takes things in without question, a faith that simply hears answers and automatically receives them as true.

And I don’t think that’s it at all.

Find ways to live out and embody your baptismal calling.

Go to the places where Jesus says God is to be found—in the least, the outcast, the downtrodden, the ones of no account—and treat them as members of your own family.

Go to the hurting places of the world with arms open and hands ready to serve and see what experience God has in store for you there.

See the world as God sees the world: with love and compassion, full of wonder and awe.

See yourself as God sees you.

See others as God sees them.

Experience true greatness in the wonder and awe and everyday amazement of being called and being given to one another to love and to serve.