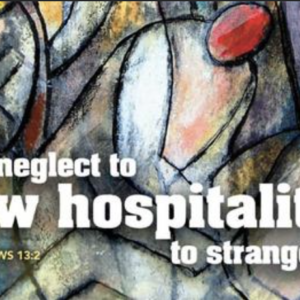 1 On one occasion when Jesus was going to the house of a leader of the Pharisees to eat a meal on the sabbath, they were watching him closely. 7 When Jesus noticed how the guests chose the places of honor, he told them all a parable. 8 “When you are invited by someone to a wedding banquet, do not sit down at the place of honor, in case someone more distinguished than you has been invited by your host; 9 and then the host who invited both of you may come and say to you, ‘Give this person your place,’ and then in disgrace you would start to take the lowest place. 10 But when you are invited, go and sit down at the lowest place, so that when your host comes, your host may say to you, ‘Friend, move up higher’; then you will be honored in the presence of all who sit at the table with you. 11 For all who exalt themselves will be humbled, and those who humble themselves will be exalted.”

12 Jesus said also to the one who had invited him, “When you give a luncheon or a dinner, don’t invite your friends or your siblings or your relatives or your rich neighbors, in case they may invite you in return, so that you would be repaid. 13 But when you give a banquet, invite those who are poor, disabled, lame, and blind. 14 And you will be blessed, because they cannot repay you, for you will be repaid at the resurrection of the righteous.”

You lavish us with extraordinary gifts,

And we could never give back to you

As extravagantly as you have given to us.

Give us courage and boldness

To be people of invitation.

Help us to invite others, our neighbors,

To experience the same powerful

Grace and love we have received from you.

One of the best meals I’ve ever had was on our honeymoon. We went to New York after we got married, and right when we got there we asked the hotel concierge for a recommendation for a classic New York steakhouse, which he gladly provided and so we made reservations for a couple nights later. Y’all… This place was great, and it had everything. Exhaustive wine list, white table cloths, and the waiters had those little table scrapers that they pulled out of their pockets to clean your crumbs off the table. It was fantastic. And, it was a really good steak.

Now we’ve had other really good steaks elsewhere, but this place in New York was also one of the times when I was painfully aware that I was out of place, like I didn’t belong. I mean, we were just a couple of 20-somethings from Texas who had just gotten married, we really didn’t have any business being in one of New York City’s fine dining establishments, but you know, I guess our money spends the same as everyone else’s. But that feeling of being out of place…that feeling you get that everyone’s looking at you because it’s like they know you’re not supposed to be there…that kind of shameful feeling sticks with you, and it’s a feeling that I think resurfaces often in our lives.

Shame is a powerful emotion. So powerful, in fact, that we can start to believe the lies that our shame tells us about ourselves.

Contrast that feeling with how I felt just a few days before that steakhouse in New York, at our wedding reception, and the differences couldn’t be more striking. In that case, we were the hosts. We were the ones who made the guest list in the first place, much less had the most right to be there. And not to brag, but it really was a great party. Hamburgers, hot dogs, Cracker Jack, open bar…all at the Ballpark in Arlington…I’ve told y’all before, we threw a great party that night.

When have you felt painfully out of place, church? When was a time, maybe a meal, that you were so aware that you had no business being there? And you just knew that everyone else knew it, too… Everyone knew that you didn’t belong…

Jesus is invited over for dinner after church. We’d say Sunday dinner, but for Jesus it was probably Friday or Saturday, right? Jesus is invited over for dinner and noticed the kind of maneuvering that was taking place trying to get a better seat at the table, trying to sit closer to the head of the table, to the place of honor, which was reserved for the host. When you host a dinner or a party, where do you sit? Usually at the head of the table, or somewhere else? And where does everyone else try to sit? Usually near you, near the host, right? In ancient Roman custom, the tables were arranged in a kind of “U”-shape, and the host sat at the end place, at the head of the table, and the guests arranged themselves next to the host, one after the other, in descending order their place of importance within the Roman empire. So politicians and wealthy folks first, then the tradespeople, then the servants, on and on, etc.

Jesus says, “Don’t presume to take a higher place than you should, in case the host has invited someone more important than you. In that case you would be shamed if and when your host asks you to move down to a lower spot. Instead, sit at a lower place, and in that case your host would come and honor you by asking you to move up to a higher place.” This is fitting with one of Jesus’ consistent messages throughout the Gospel of Luke, this great leveling of things, the powerful and mighty are brought low and the lowly are lifted up, all who exalt themselves will be humbled and those who humble themselves will be exalted.

But then Jesus goes further. He turns to the host, the one who gave the dinner, but really he’s still speaking to everyone at this point, and he says, “When you host a dinner, don’t invite the wealthy and the powerful and your friends and neighbors who are of higher status than you, don’t invite these folks just to get on their good side so that they’ll invite you to things.” In other words, don’t seek to bend over backward to elevate your own status. Rather, when you host a dinner, invite all the so-called wrong people: the poor, the blind, the disabled, the lepers, all the less-thans, the least of these…invite all the people who can’t pay you back, who can’t offer you anything in return…because they can’t repay you and it is to such as these as the kingdom of heaven, the reign of God belongs.

It’s the same thing we hear over and over from Jesus, particularly in the gospel of Luke. Align yourselves, put yourself proximal to, be found standing with and alongside…the poor, and the outcast, and the cast-aside, and the downtrodden, and the ones with ailments, the ones with disabilities, the widows and the orphans, the marginalized and the vulnerable, the ones the world thinks nothing of…because by being close to them, by placing yourself in close proximity to the suffering and the pain of this world, there you will find God. Whatever you do to, however you treat, those who are suffering and those cast aside by the empires and powerful of this world, you do to God. To look into the face of the poor and the marginalized and the vulnerable…to look into the face of suffering…is to see God.

We’re throwing a party here at New Hope, too…we’re having a banquet. On Sunday, September 11, along with congregations across the country, we’ll join with our denomination, the Evangelical Lutheran Church in America, in celebrating “God’s work. Our hands.” Sunday. A day of celebration and service that honors who we are as Lutheran Christians, a people freed in Christ by the love of God to love and serve and care for our neighbors and our community. And we’re having a big party.

We have one worship service at a special time, 9:00am, here in the Sanctuary, and then we’ll go over to our brand spankin’ new Community Center. We’ll have brunch! We’re bringing in breakfast tacos…we’ll have mimosas…we’re asking you to bring fruits and pastries…we’ll have coffee and juice…and mimosas… We’ll have mimosas… And we’ve got a wonderful bunch of service projects that focus on our community, our city, and even the world. There’s a sign up sheet in our Anchor newsletter for you to sign up to bring items for brunch and supplies for our service projects…there are still lots of slots available, so please, please, please do sign up to help.

But here’s the thing, church…we’re having a party…and you’re the host. This party is for you…but you’re the host. You’re the ones in charge of inviting. So here’s the deal…I’ve got some helpers I’ve asked to help me out. We’ve already made the invitations for you. Our young people are coming around with your invitations…every single person—not family, every single person—is getting a very small packet of 5 invitations. Your responsibility, church, your job, your…call, disciples of Christ…is to invite. The only place these invitations do no good is in the backseat of your car, or on your kitchen counter, or God-forbid the recycle…these invitations don’t do any good outside of the hands of others. We’ve made it easy as we possibly can for you.

Give them an invitation, offer to give them a ride…invite 5 people to come with you on Sunday, September 11.

Jesus’ illustration this morning is not just a culture of invitation, but a culture of invitation for which it is impossible for those invited to reciprocate. An impossibility of reciprocity. It casts aside those feelings of shame and says they have no place here because all are valued and invited and celebrated. This impossibility of reciprocity is the foundation of our Lutheran faith. Everything we have and everything we are is first given to us by God.

We are recipients of extravagant and completely undeserved gifts. Church, this is the point of grace. It’s unmerited. You can’t earn it. It’s given to you because it is the nature of God to lavish such blessings on you. It’s what we experience every week at this table in the Eucharist.

The grace of God flies in the face of the way the world works. It casts those feelings of shame aside. You’ve heard over and over that you are nothing more than your work. You can only get as far as you are willing to work. The idea of grace dispenses with this notion of being self-made entirely. The grace of God says because I love you, I have given you these gifts. God loves you because you are a beautifully and wonderfully made child of God, not because you’ve earned it.

All we can do is throw a party, celebrating the goodness of God and all God has done for us. And invite others to it. Invite those who cannot pay you back, who cannot offer you something in return.

So invite them. Give them an invitation.

Invite them to this party we’re having.

What’s your vision for New Hope, church? What do you want to see happen here?

But just as much…I’d love to have another incredibly memorable meal.

My vision, at least for now…I really want to run out of tacos.